The Brickworks is an award-winning, tree-lined dining and entertainment precinct that is in direct contrast to the neighbouring homogeneous internalised shopping centre.

As its name suggests, The Brickworks has a brick façade that commemorates New Lynn’s heritage as New Zealand’s brick-making capital. Buchan has sought to keep the character of the area by creating a series of precincts.

The first component is a 21st century big box cinema, elevated over the car park, and grounded to reinforce the key corner with a welcoming entry foyer. It combines with the second component. This is a series of small-scale buildings with saw-tooth roof forms that refer to the light industrial heritage buildings of New Lynn. They create the framework for bespoke tenant fitouts to house the restaurant and dining offer.

The design complies with the District Plan active edge provisions. A series of entries position along the street edge, rather than a singular grand entry found in traditional shopping centres. This gives the street elevation a variety building forms and materials palette with a series of entry points and tactile façade. Seating zones spill out of the tenancies to create interaction with the internal spaces behind. 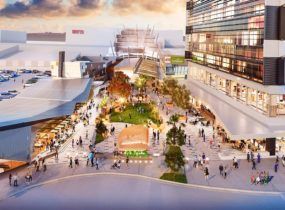